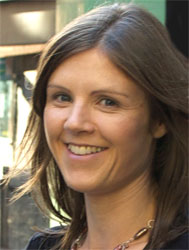 My classes are attended by a broad range of people of all ages and needs, including those experiencing chronic pain, as well as those with back, shoulder, hip, knee and foot injuries, those with postural and breathing difficulties and those dealing with depression and stress. I have a strong interest and experience working with artists of many disciplines, including musicians, dancers and actors through workshops via the Contemporary Music Centre, DanceHouse and the Lab.

Karen has been practising Feldenkrais for over 10 years. Her first introduction to the Feldenkrais Method was in 1999 whilst working in the arts she set up classes and workshops for the professional dance community in Dublin. During this time she recognised the importance of the Feldenkrais Method for their somatic education. Later, she herself used Feldenkrais to overcome her own back pain after trying a wide range of other practices, however, Feldenkrais was the key to her recovery. Since then the method has enriched her life on all levels; physical, emotional and psychological but particularly Feldenkrais played an important role during her pregnancy, natural child birth and post natal care. Karen's passionate interest in somatic education led her to embark on a Feldenkrais Training programme in 2006. Since then she has trained in Switzerland, Italy, the UK and the USA. Karen is a Guild Certified Feldenkrais Practitioner, a member of Feldenkrais Ireland and a member of the Feldenkrais Guild UK. She continues to augment her training with advanced training programmes worldwide and has chosen to develop her own practice entitled, Feldenkrais Works, in Dublin's City Centre. For further information visit: www.feldenkraisworks.ie or on facebook check out feldenkraisworksireland.